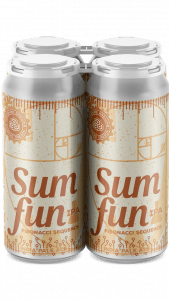 The Fibonacci Sequence is named after Leonardo of Pisa, an Italian Mathematician born in 1170. Only in the 19th century did historians come up with the nickname, Fibonacci, to distinguish the mathematician from another famous Leanardo of Pisa. Fibonacci’s rough meaning was “son of the Bonacchi clan.” He introduced this sequence to Western European mathematics in his book, Liber Abaci, published in 1202 and it was used to calculate the growth of rabbit population. The mathematical equation describing it is Xn+2 = Xn+1 + Xn. However, the sequence had been described as early as 450-200 BC in Indian Mathematics. These numbers are tightly connected to what’s known as the golden ratio. The golden ratio does appear throughout the natural world in the flowering of an artichoke, an uncurling fern, and the arrangement of a pine cone’s bracts.

Monthly Puzzles
Each month, we’ll post a new puzzle when we release Sum Fun IPA. To submit an answer to the puzzle, head to Instagram and send us a DM. The first 5 people to DM us with the right answer will be sent a $10 gift card to an Oakshire Taproom! Happy puzzling 🙂

Puzzle Number 1: Fibonacci Puzzle
Without using a spreadsheet, tell us the sum of the 5th, 15th, 25th, and 35th numbers in the sequence?

To submit your answer, DM us a photo of your handwritten work + the answer via Instagram (@oakbrew). Thanks for math-ing and drinking with us!