Welp. we’re back at it again making more open oak fermented beer destined for extended aging in barrels before getting introduced to fruit. We made wort on Monday evening and pitched our mixed Brettanomyces culture into the barrels. It took nearly 48 hours for fermentation to start in any barrels, and nearly 72 for all the barrels to be fermenting.

The interesting fact is how the barrels reacted to fermentation. Two of the barrels took off like normal and formed a head of krausen (yeast and wort proteins) at the top of the barrels. The other two barrels, the ones that took longer to start, formed what is a called a pellicle on top of the beer. What is this pellicle?

Pellicles are most commonly found in wild and sour fermentation. They are not often able to be witnessed because they form inside the barrel and the only way to see one is to pop the bungs out during aging. We got lucky with our open fermenters and get to witness a pellicle in all its strange glory.

A pellicle will form as wild beer ferments and ages and the beer comes in contact with oxygen. Brett prefers a semi-aerobic (it likes a small amount of oxygen) fermentation. In general the only time that a brewer wants to introduce oxygen is before fermentation as it helps to promote yeast cell growth. After the initial growth of the yeast, oxygen is harmful to the beer. Because Brett works so much slower extended absorption of oxygen can help the yeast through the course of fermentation and aging. This amount of oxygen however needs to be regulated. To do so Brett forms a pellicle.

The pellicle is a thin bio film that forms on the top of the fermenting beer. This film allows for a controlled intake of oxygen over the course of fermentation. It prevents the beer from taking in too much oxygen, which with result in oxidation characteristics such as wet cardboard. It also helps protect the wort from other organisms trying to get to the sugar such as acetobacter.

The yeast goes the top of the beer where it is in contact with oxygen and starts to link together to form the pellicle. Where the different areas link up spider web looking designs often begin to form as well as bubbles of trapped CO2 from the beer below. Though it can look rather strange at first, the pellicle is a beautiful reminder of the wild fermentation process that we as brewers are enamored with. Below are some pictures of our pellicles.

Cheers all and have a great weekend! 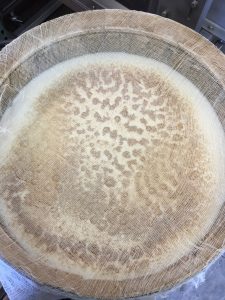 Making the world a happier (and more delicious) pl

West Coast Waves of Wheat is our bright and refres