As brewers we come from a rich and lively history dating back thousands of years. Of course as technology advanced, brewers embraced it. Long were the days of free fermentation in open vessels. A very small amount of European brewers hung onto those traditions.

As craft brewing began to arise in American, we embraced the use of stainless steel everything. We also fermented all our beer in closed vessels, for fear of contamination of what is considered wild yeast and bacteria. Recently however craft brewers around the globe have begun to embrace the traditions and brewing techniques of old, but often times with a modern twist.

Recently we have set out to join this small, but growing group of brewers in a quest to pay homage to our brewing ancestors. For much of our existence as a company we worked with the art of aging beer in oak vessels, whether they be wine or spirit barrels. However, nearly every time we primarily fermented the beer in closed stainless steel, and in the case of our wild and sour beers would then add these “wild” yeast and bacteria directly to the barrel for a secondary fermentation and aging.

Recently we decided to give 100% oak fermentation a try. We took it a step further and built open top fermenters out of used wine barrels. The reason was to truly embrace the environment of our brewery and add what is referred to in the wine world as terroir to our beer. We pitched a mixed culture of different strains of brettanomyces to the barrels and let them sit open for fermentation. This allowed the beer to also come in contact with the air in and around our brewery, as well as the cultures of yeast and bacteria that live in the wood.

For our first iteration, being release tonight at the Public House, we fermented the beer in oak for two weeks. Once fermentation was complete we moved the beer to a stainless steel tank atop a mix of blackberry, marionberry, and raspberry at a rate of nearly one pound of fruit per gallon. The beer refermented the sugar in the fruit and picked up a beautiful purple color. The result is a bright and expressive representation of the different fruits that we used.

Just last week we brewed our second batch into our open barrels where it has been quietly fermenting away. In the next day our so we will transfer the beer into more oak wine barrels for an extended aging, before we again transfer it onto fruit. We hope to have two new fruited wild beers for enjoyment come Labor Day Weekend.

It has been a really fun and exciting project to undertake at the brewery and we look forward to seeing the results moving forward. Some pictures are posted below so you can see the process. 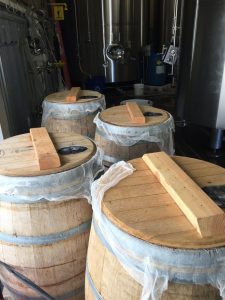 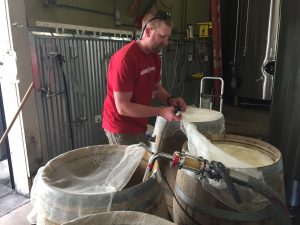 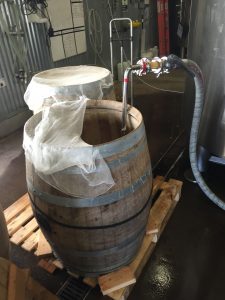 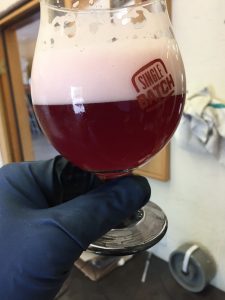 The Perfect Storm of Nelson Sauvin, Idaho Gem, and

Chilly outside? No problem! You'll be warm and dry