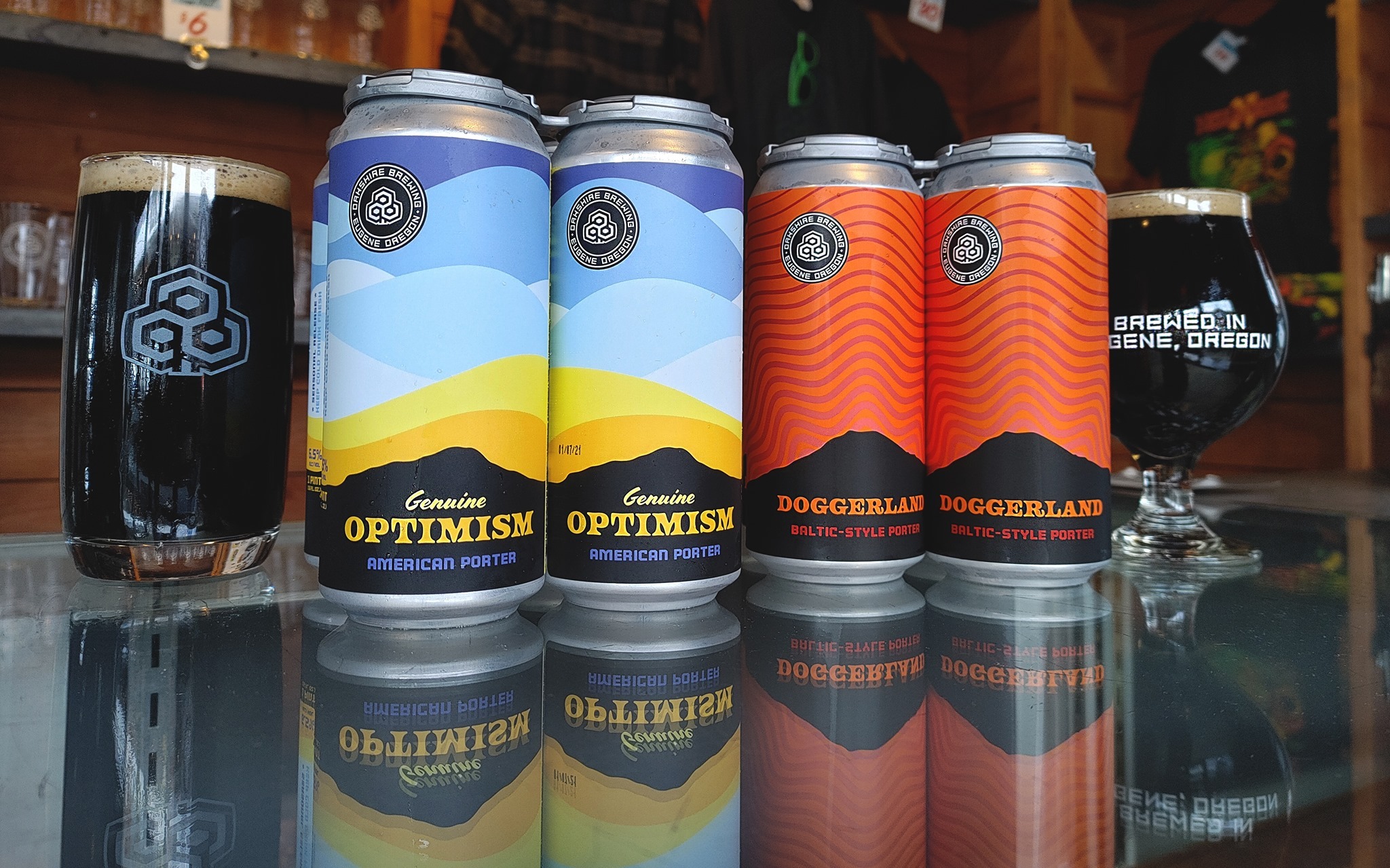 Oakshire Brewing kicks off the New Year with the dual release of Doggerland Baltic-Style Porter and Genuine Optimism American Porter. Both beers are now available in 16oz cans at Oakshire in Eugene and Portland, while Genuine Optimism will be also be available across the Pacific Northwest.

Though both Doggerland and Genuine Optimism are Porter in name, each are different in their brewing style. While Dogglerland is bottom fermented as a lager, Genuine Optimism is top fermented like an ale. Coming from opposite ends of the brewing spectrum, each beer has plenty of similarities including rich, roasty notes that shine through prominently while viewing the beer’s beautiful jet black appearance.

After sampling both beers, our favorite of the two ended up being Genuine Optimism, though Doggerland comes in a very close second as it lives up to its 2018 World Beer Cup Silver Award. Genuine Optimism is a great example of an exceptional American Porter, one that will stand proudly alongside any other available Porter in the marketplace. Yes, even that one from Bend, Oregon.

Below are full, elaborate descriptions on each beer as provided by Oakshire Brewing…

Genuine Optimism – American Porter
For many reasons, 2020 was a rough year for everyone. As a brewery we have watched our industry and patrons face enormous struggles. We’ve watched our favorite dining establishments, entertainment venues and bars close their doors, some permanently.  However, as we stand at the gates of 2021, we are excited for all the potential that the new year has to bring!

To celebrate that excitement, we’ve crafted “Genuine Optimism” American Porter. Crafted with American malted barley and a blend of American and British specialty malts, this robust porter was hopped in the kettle with Northwest grown Nugget, Columbus and Centennial, as well as an addition of brown sugar.

Fermented with our house ale yeast “Genuine Optimism” is 6.5% ABV and clocks in at approximately 50 IBU. Pouring pitch black with a dark tan head, the nose erupts with notes of roasted coffee and baker’s chocolate with hints of pine and dark fruit from the hops. A full and rich mouthfeel coats the palate, with a pleasant hoppy bitterness. The taste follows with a ton more chocolate and coffee character, as well an earthy floral character and tinge of hop resin.

Each sip finishing smooth and satisfying, the beer to start the new year!
6.5% ABV 50 IBU
Availability: Core Seasonal available throughout the PNW and Colorado

Doggerland – Baltic-Style Porter
Doggerland is a reference to the land under the North Sea that connected England with Norway, Denmark and Sweden as recently as 8 thousand years ago, before being swallowed by water. During the 1800’s strong porters were traversed across North Sea to the shores Scandanavia and onward to the connecting countries on the Baltic Sea. As brewers in these Baltic countries began to attempt to recreate these strong porters using ingredients ingredients native to their brewing cultures, particularly lager yeast; and so the style of Baltic Porter was born.

In the winter of 2016 we released our version of Baltic Porter named after Doggerland as our newest (and unfortunately short lived) seasonal. Delicious yes, but quite difficult to explain. Yes, it is a porter, but it is also a lager. And yes, most Porters are ales and brewed fairly quickly, but these are lagers and fermented cold and slow for a very long time. You see my point, but I digress.

The last batch of Doggerland was released in December of 2016. Our brew team quietly stored some cases in the back of the coolers at our brewery. Sixteen months later, in the spring of 2018, the brew staff submitted that last batch of Baltic Porter to the World Beer Cup and snagged a Silver Medal in the Baltic Porter category, a first medal in the WBC competition in Oakshire’s history.

For 2021 we sought to recreate that icon Oakshire beer and finally get it into cans!

Brewed with 2-Row malted barley, German Munich malt, debittered dark malts as well as a touch of cherry wood smoked barley for added complexity. German hops and Belgian candy syrup were added to the boil, and the beer was fermented with our house lager yeast.

Pouring a vibrant black with a deep tan head Doggerland burst with notes of licorice, raisin and dark chocolate. Upon first sip the debittered black and chocolate malts add layers of chocolate and caramel malt flavor without any burnt or astringent notes. The cherry wood smoked malt adds complexity through each sip with a big creamy and smooth finish from the cold and slow ferment.

At a dangerously drinkable 8.1%, this recipe shines as a prime example of a style driven beer. Our brewers sought out to create Baltic Porter like it was years ago. We think they did a damn good job!
8.1% ABV
Availability: Oakshire’s Eugene Public House and Portland Beer Hall

Thanks to Greg and the team, a fresh batch of Recl