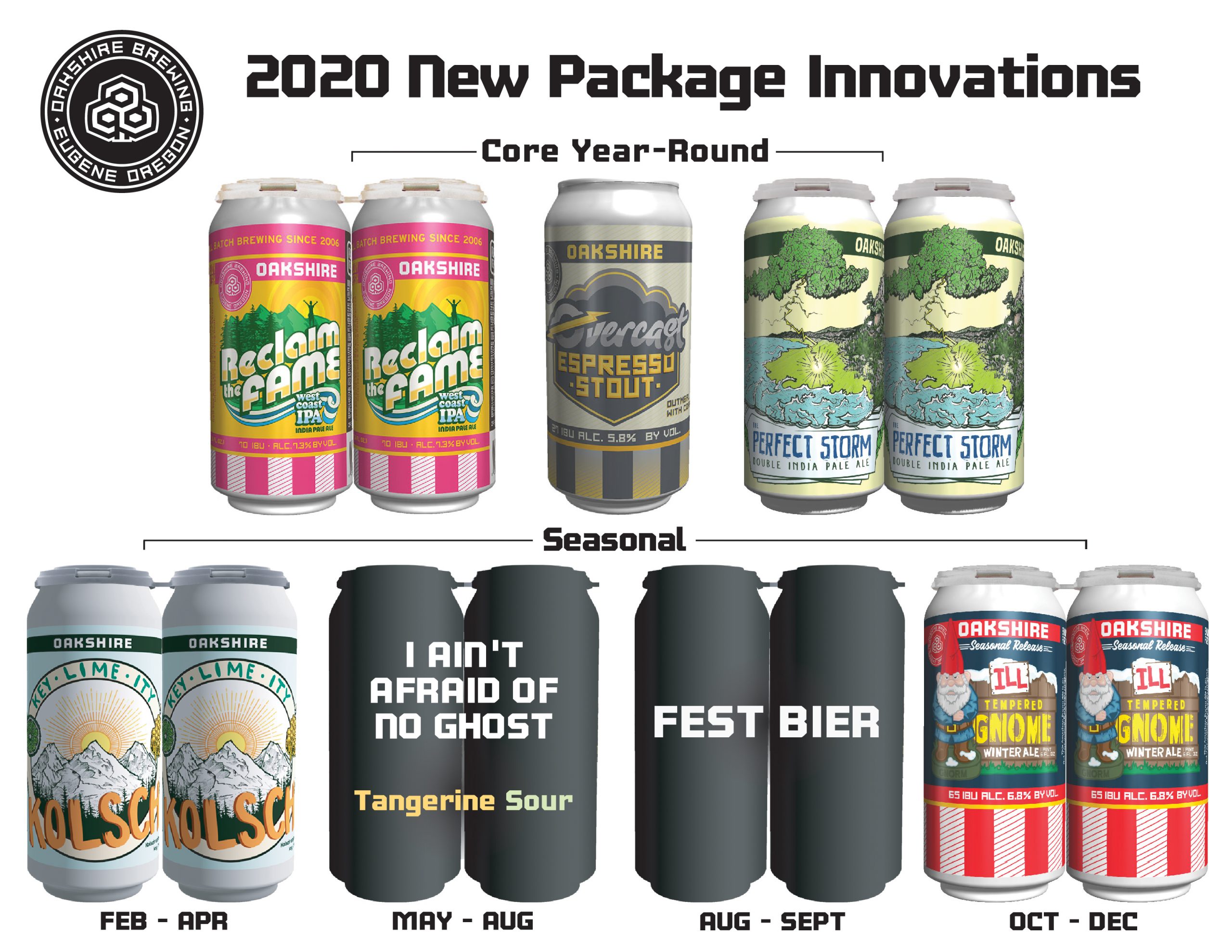 The Oakshire team is excited to announce changes to their 2020 Core and Seasonal Programs, including moving two favorites from Seasonal into their Core lineup, in brand new packaging – The Perfect Storm Double IPA and Reclaim the Fame West Coast IPA. While Oakshire will continue to use 22oz. bottles for barrel-aged and Vintage releases, they will move Seasonal beers into 16oz. 4-packs, which include: Key-Lime-ity Kolsch with Honey, I Ain’t Afraid of No Ghost Tangerine Sour Ale, Fest Bier, and Ill Tempered Gnome Winter Ale. Core beers in 12oz. 6-packs will remain, and the go-to breakfast beer, Overcast Oatmeal Espresso Stout, will also have a 16oz. single can option. Reclaim the Fame West Coast IPA and The Perfect Storm Double IPA will be available on draft and in 16oz. 4- packs around Oregon, Washington, and Colorado, and in Oakshire’s taprooms, the Public House in Eugene and the Beer Hall in Portland, starting after January 21st.

The Perfect Storm Double IPA was initially released in 2007, and contains copious amounts of Citra, Mosaic, & Simcoe hops at 8.6% ABV and 60 IBU. Director of Brewing Operations Dan Russo says, “The Perfect Storm has long been one of our favorite seasonal beers here at Oakshire released each January, but then inevitably it disappears and we have to wait another year. We decided to go into the new decade bringing one of our favorite hoppy beers into our core year-round line-up!” The Perfect Storm will be the first of Oakshire’s 2020 releases in 16oz. cans to feature packaging with hand-drawn artwork, encompassing the spirit of the beer inside. The Perfect Storm’s label was created by one of Oakshire’s own, Margaret Abassi, and she created a stormy scene of green hop clouds providing a lightning strike of flavor to a Pacific Northwest landscape and crashing blue waves representing the churning of aromatic hops and juicy malts in this Double IPA.

Reclaim the Fame West Coast IPA, bursting with aromas of tropical fruit and pine resin, was released last summer and became a hit with a balanced bitterness and dry finish at 7.3% ABV and 70 IBU from Mosaic, Simcoe, Chinook, and Falconer’s Flight hops. “Reclaim the Fame reminds us why we fell in love with IPA in the first place,” says Russo. Get the first taste of Oakshire’s Seasonal releases, as well as Vintage and taproom-only Pilot beers during their weekly Tuesday Beer Release at the Oakshire Public House in Eugene and the newly opened Portland Beer Hall.

We're still digging on Spicy Cara and all its swee

Beer Hall Light Lager is crispy, cool, and suits a